But both views are radical and divide the world into black and white. We must neither succumb to the cancel culture, nor hand the microphone back to such artists without thinking and without comment. And that is actually the critical point of Nena’s performance with Florian Silbereisen. 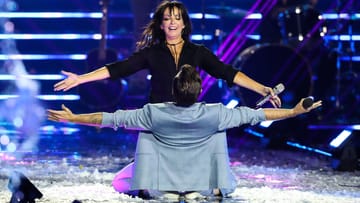 There was no discussion worth mentioning about her comeback beforehand, little transparency, she was simply brought back by the production. Not a word about their statements. Neither from her nor from Silbereisen. Not even from the MDR, a public broadcaster whose job it is to provide information.

Especially since everyone involved must have been aware from the outset how serious this decision was would polarize. But the outcry from some parts of the population was ignored. And that’s wrong. The MDR has clearly made things too easy for itself and has rightly drawn criticism, incomprehension and anger.

We need an open discussion – and not a little convincing statement in which Nena’s appearance is justified with freedom of expression and her success. Because if the comeback of a controversial artist can be justified with their great music, then what are we waiting for? Let Xavier Naidoo bring out his old World Cup anthem “This Way” for the European Women’s Championship in England. In addition to Dieter Bohlen, let’s also welcome Michael Wendler back to the DSDS jury.

Nena and Florian Silbereisen: The music icon and the pop star stood together on stage at “The Big Hit Comeback 1080”. (Source: IMAGO / Christian Schroedter)

The production should have approached Nena’s comeback differently, just like Nena herself. It would have needed a statement from both sides, convincing ones Arguments why the singer should be brought back after all the headlines. But there wasn’t. Was it because there was no good reason? Because Nena was not ready to put her statements and connections into perspective?

These are questions that the public is now asking – and to which she does not receive a satisfactory answer. “I remain open to encounters with people, unbiased, from the heart,” Nena wrote on her Instagram account a year ago. This emphasized openness is now completely missing. Instead, the artist and MDR practice ignorance. This is exactly how we should not deal with such controversial and difficult issues in the future.

How much hair loss per day is still normal?